Home » Blogs » How do you farm in space?

How do you farm in space? 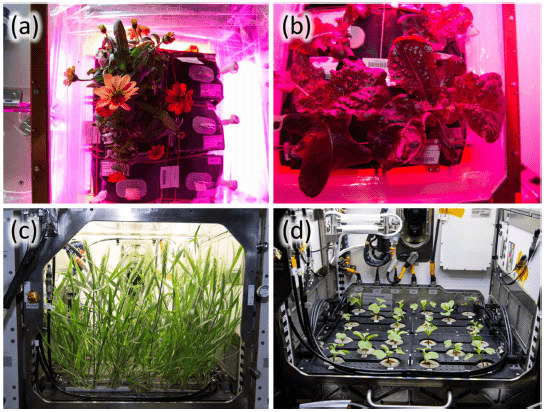 Unlike horticulturists tilling fields on Earth, extraterrestrial farmers cannot directly harness the light of the sun to power a plant’s photosynthesis. So how can astronauts exploring the far reaches of our solar system grow food?

This was the question which NASA wanted answers for. NASA is the US agency responsible for ventures into space from the moon landings to the Space Shuttle to today’s explorations of Mars. The research team, consisting of scientists from Utah State University and Lumileds engineer Dr. Wouter Soer, was tasked with determining how to create the most efficient method of producing artificial light under which to grow leafy vegetables such as lettuce in space.

The paper, published in June 2021, discovered a configuration of LEDs which is as much as 10% more efficient than the best equivalent systems in use on Earth today. Just as important, it also took account of the effect of plant growth on the minds as well as the bodies of astronauts.

How a plant factory defies gravity

The motivation for the NASA-sponsored research is the US’s next great ambition: a crewed mission to Mars. One of the big problems will be the question of how to feed a crew on the long flight to Mars – and potentially once a space station is installed on the planet. If the crew can grow food in its spaceship, it has to lift less packaged food from Earth into space.

This is a crucial calculation: the design of space rockets always has the overriding goal of weight reduction. This goal also underpinned the Utah/Lumileds research into efficient light generation for plant growth. The more efficient the light source, the less heat sinking it requires, and the smaller the solar PV array required to power the lights; both factors contribute to weight reduction.

Experience in terrestrial plant factories shows that LED lighting systems can achieve very high efficiency. The Utah/Lumileds research team’s task was to figure out a way to exceed the performance of today’s best horticultural lamps.

This involved an intricate set of calculations to balance two key factors:

According to the NASA research paper:

‘Both of these LEDs (blue and red) have relatively similar efficiencies…but due to the lower energy of red photons, the red LEDs input 32% less energy for the same quantity of photons. Additionally, red photons drive photosynthesis with about 25% higher quantum efficiency than blue photons

…. For both reasons [red] LEDs at 660nm would comprise a large fraction of the overall lighting fixture for deep-space crop production, but other wavelengths (especially some blue photons) are necessary for normal plant growth and development.’

So efficiency would dictate a predominantly red light for plant growth in space.

But this efficiency calculation is not the only issue that NASA needs to consider. Space travel can be disorientating and mentally destabilizing. Psychological research has suggested a strong link between contact with nature and feelings of mental well-being. Combinations of only red and blue LEDs produce a characteristic purple light with poor color rendering, under which plants do not evoke the glory of nature. The mental health benefits to the astronauts, the researchers suggested, would be severely reduced if the plants growing in the spaceship do not look like plants do on Earth.

The optimal mix of LEDs for the space farm

What the researchers found, then, was that a farm in space needs a grow-light source consisting of equal numbers of white and red LEDs.

The other main finding of the research is that system efficiency is maximized through the selection of the latest, high-efficacy LEDs available on the market, paired with an efficient power supply. The LEDs used in the NASA study were LUXEON white emitters at color temperatures of 4000K and 6500K.

The horticultural lighting system produced by the Utah/Lumileds research team was tested in a canopy gas exchange chamber at Utah State University. System efficiency was measured at 3.60µmol/joule, which, according to the paper, is around 10% better than any other red/white combination fixture measured by the Design Lights Consortium.

This is already an impressive result, but research and development teams at Lumileds continue to strive for higher LED efficacy year on year, so the efficiency of grow-light systems for space travel can be expected to improve still further.

As the dream of visiting another planet in our solar system inspires a watching world, NASA can rely on LED technology to feed astronauts on the more than 50-million-kilometer journey to Mars.

Lumileds is making continuous advancements in lighting. Subscribe below to be updated on new breakthroughs, new products, and announcements as they happen.
We use cookies to personalize content and to analyze our website traffic. We also share information about your use of our site with our social media and analytics partners, as noted on our Cookie Policy. If you continue using this site, you consent to our use of cookies.I UnderstandCookie Policy