Home » Blogs » Rise to the top: 20 years of innovation have transformed the LED

Rise to the top: 20 years of innovation have transformed the LED 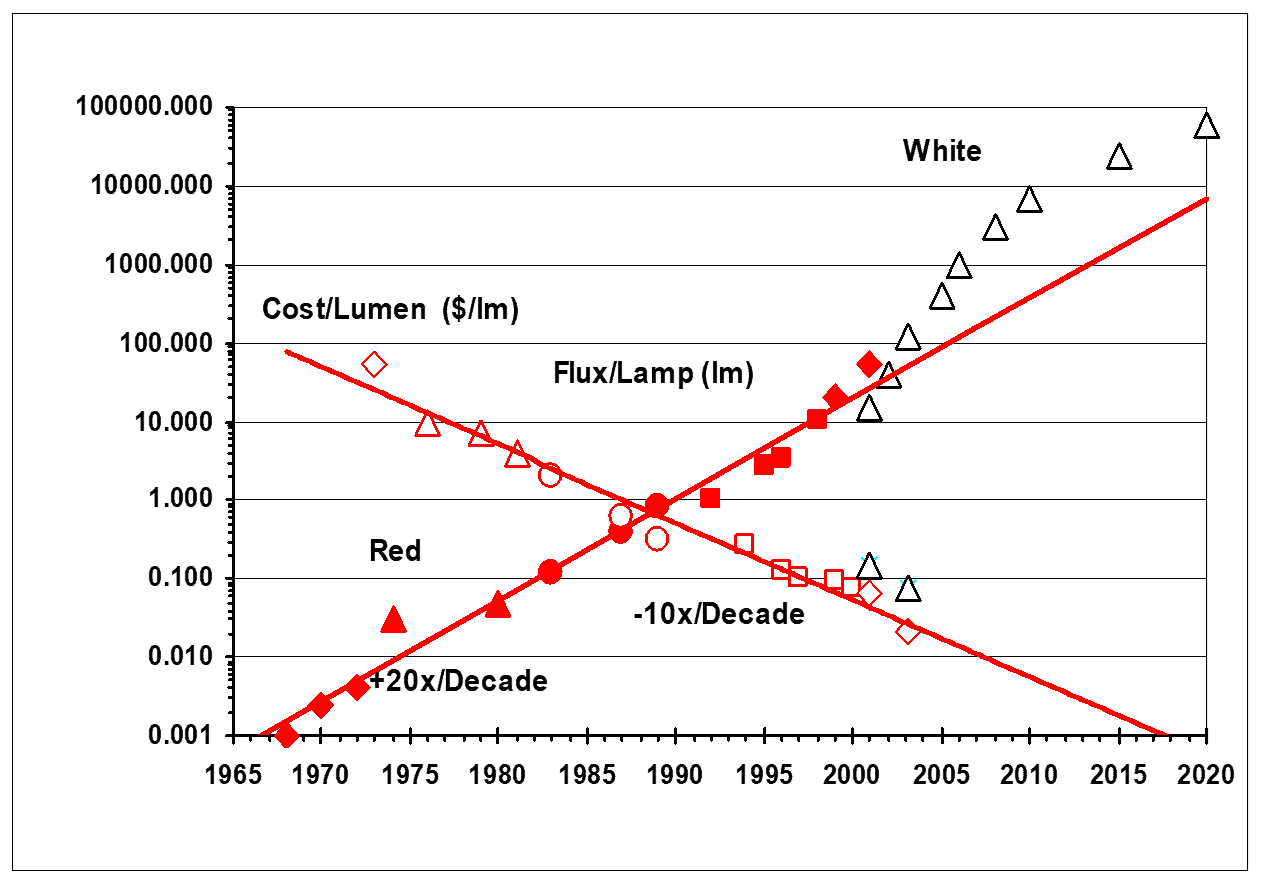 In just two decades, Light Emitting Diodes have become the world’s universal light source and there is no sign that LED innovation will stop anytime soon.

Like any ubiquitous object, LEDs have become so normal a part of our built environment that we barely notice them anymore. In fact, LEDs as a useful source of light only entered the illumination industry’s consciousness in the late 1990s. At that time, people began increasingly talking about ‘LED lighting’, making the distinction from ‘conventional light sources’ such as bulbs.

Today, the industry has turned full circle: we no longer need the term ‘LED lighting’, because almost all new lighting uses LEDs. LEDs are everywhere – in general lighting of course, but also in almost every electronic device that makes us safer, that allows us to communicate or that performs work for us. From illumination on earth to crop growth in space, we continue to find new uses for the reliable, sustainable, consistent and bright light emitting diode.

It is an astonishingly fast transformation: incandescent and halogen bulbs were the unchallenged primary light source in homes and offices for more than a century. Fluorescent never became the favored replacement, long suffering from quality of light issues. Yet the tiny LED has taken just two decades to make the bulb obsolete. A look back over the past 20 years reminds us just how much innovation in technology and in the application of LEDs has been required to create this transformation.

Almost 20 years ago, in February 2001, Compound Semiconductor magazine was publishing news of a remarkable breakthrough by one of the LED pioneers – a new venture based in the heart of Silicon Valley that went by the name of Lumileds. The company, Compound Semiconductor announced, ‘has demonstrated a single white LED with an output of 17 lumens. This is four times more white light output than the best-known white LED. This device operates at 350mA and 3.2Vf.’ This new 17 lm white LED was to be marketed as LUXEON technology – a brand name which has stood the test of time.

Compound Semiconductor’s reporter described how this 4x increase in flux promised to enable a wide range of new applications in general lighting: map lights, airplane reading lights and emergency lighting. The article went on, ‘A well-controlled single point light source allows lighting designers to design sleek, compact fixtures and couple the light to a single optic in the light fixture. This is not possible with traditional low-power 5mm white LEDs, due to the multiple LEDs required, leading to a wasteful loss of light and a bulky, clumsy design.’

Even in the early 2000s then, the benefits of LEDs were clear, even if the means to realize those benefits were not yet available.

LEDs ‘a bit of a gimmick’

The passage of time, however, makes us forget how staunch the industry’s resistance to the adoption of the new technology was. Some four years after the announcement of the 17 lm LUXEON LED, a 2005 edition of LEDs Magazine was canvassing the views of lighting designers. A typical opinion expressed at the time was that ‘LEDs in lighting are still a bit of a gimmick. They are popular and used quite widely, but often they’re used just because they’re a new technology. Sometimes this can be reflected in the marketing approaches of LED lighting equipment makers, which focus on the funky color-change effects that can be achieved rather than addressing the needs of the professional lighting market.’

At that time, LEDs were just a specialty light source and were only beginning to find their way into a few architectural lighting applications. It was another four years before LEDs began to be adopted in general lighting in any noticeable volume. A recent market overview by Bob Steele, Strategies in Light co-chair and one of the foremost analysts of the LED industry, pinpoints 2009 as the start of the revolution.

Steele said: ‘In 2009, the adoption of white LEDs in the general lighting market began in earnest… Phosphor-converted white LEDs had finally achieved the price and performance levels that made them desirable as light sources for luminaires and lamps relative to legacy illumination products that relied on incandescent, fluorescent, and halogen sources. In particular, the high luminous efficacy (100+lm/W) and long lifetimes of white LEDs allowed the higher prices of LED lighting products relative to legacy products to be paid back in 2-3 years by way of lower electricity costs and maintenance savings.’

This turning point in 2009 had been foreseen for more than a decade by those visionaries who brought the LED lighting industry into being. Long before the development of power LEDs, figures such as Dr George Craford, a founder of Lumileds, and the inventor Dr Roland Haitz predicted the efficacy roadmap that would produce commercial LEDs that delivered 100 lm/W and beyond.

These visionaries could also see that technical innovations would resolve the concerns about quality of light which underlay the reservations that lighting designers were expressing back in 2005. Fluorescent lamps had never been as widely adopted as hoped in part due to their perceived poor quality of light. Innovation was the way to ensure that LEDs avoided suffering the same fate.

So, in the second decade of the LED revolution, the innovation continued apace, producing breakthroughs in semiconductor material composition, phosphor coatings, substrate design, thermal engineering, and the efficiency and performance of primary and secondary optics. Now, performance and efficacy have moved far beyond the levels on offer when LEDs entered the mainstream of general lighting in 2010: in mid-2020, for instance, Lumileds introduced the latest LUXEON 5050 LED for streetlights and high-bay fixtures, offering flux of 675 lm and efficacy of 172 lm/W in full bin shipments.

Looking back in another ten years it will be clear that in the second decade of development, the accelerating adoption of LEDs was spurred by technological innovations in materials and manufacturing which resulted in high efficiency emitters with excellent quality of light at a broad range of color temperatures. Without these advances, we could not have achieved novel effects such as dim-to-warm, or the human centric lighting capabilities that are poised to change consumers’ expectations of lighting installations in the next decade.

Thanks to the vision, perseverance and innovation of but a few thousand people around the world – people who could see in the dim glow of a 17 lm LUXEON LED the potential for LEDs to be a universal light source – we can celebrate the success of the LED today.

And look forward with excitement and hope to the next 20 years of inventing the never before possible.