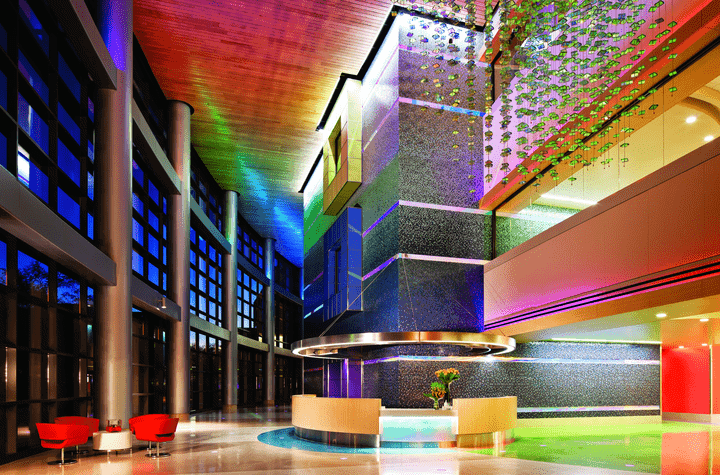 Color elevates the user’s appreciation of a space or a structure, changing it from something effective and useful into an experience that the user enjoys, likes, or even marvels at.

Color elevates the user’s appreciation of a space or a structure, changing it from something effective and useful into an experience that the user enjoys, likes, or even marvels at.

Colored lighting often plays an equivalent role in professional lighting design to seasoning, spice and herbs in the professional kitchen. Color elevates the user’s appreciation of a space or a structure, changing it from something effective and useful into an experience that the user enjoys, likes, or even marvels at.

Elsewhere, we have described how an extended palette of LED colors can free the imagination of the designer.

But the practical implementation of color in architectural lighting, in city beautification schemes or in sophisticated interior spaces raises considerations beyond just the specification of co-ordinates in the CIE color space. Manufacturers of colored fixtures such as wall grazers, wall washers, spotlights and floodlights have to satisfy other crucial requirements as well, such as:

And here, just as in the choice of colors, innovation in the LED light source is today enabling luminaire manufacturers to develop novel, ground-breaking color products which give lighting designers scope to realize new and ever more exciting visions enhanced by color.

We continue to expand the color range – the LUXEON C Color range, for instance, features 13 color choices stretching from Far Red at one end of the spectrum to Violet at the other – packaging and power options must also expand to give designers the tools they need.

Traditionally, to produce sufficient brightness in luminaires such as floodlights, manufacturers have made use of multi-die emitters which have a large Light Emitting Surface (LES). But that may be at odds with the need for tight beam control, the ability to focus color, and perhaps to pick out a special feature on the exterior of a building, such as the graceful columns on the façade of a Palladian mansion. The smaller the LES, the better the secondary optics can collect and shape the colored light output.

And a smaller light source gives greater freedom to create novel effects, for instance by embedding the fixture in a tight spot, or even hiding a tiny light source where none could ever previously fit.

So the creativity and freedom of expression of the lighting designer call for more colors, emitted in greater intensity, and in smaller luminaires which are easier to mount or to hide. Satisfying two of these three requirements is relatively easily done: meeting all three at the same time is difficult – but the latest developments in LED technology at Lumileds show a remarkable amount of progress.

In the LUXEON C Color Line, for instance, all colors share the same focal length, which results in flawless color mixing and maximum optical efficiency with no unsightly halos.

The consistency of color production is enhanced in the LUXEON CZ Color Line, a series of LEDs optimized for use in fixture designs with a narrow beam angle. The LUXEON CZ Color Line broke new ground in the color LED market, offering the highest ever ‘punch’ for applications in which the light is thrown on to a distant target. The LUXEON CZ Color Line also enables fixture manufacturers to eliminate crosstalk, ensuring a true color point when LEDs are packed closely together. These LEDs are already in use in hundreds of compact color fixtures which produce an intense color light output.

Recently, Lumileds went even further in combining small size with high light output with the introduction of the LUXEON Rubix series: these LEDs in a 1414 package are rated for a maximum drive current of 3A, producing an intense blast of Red, Green, Blue or Royal Blue light from a tiny LES. Continued development work at Lumileds will steadily expand the color choice here, as has already been achieved in the LUXEON C and CZ Color Lines.

The circle, then, is on its way to being squared: continued LED innovation at Lumileds is leading to the introduction of new color LEDs which manage to offer a smaller footprint while delivering a higher light output from a smaller LES, and maintaining color consistency without crosstalk in a new generation of fixtures in which LEDs are packed more tightly than ever before.

Get our latest news delivered directly to you.